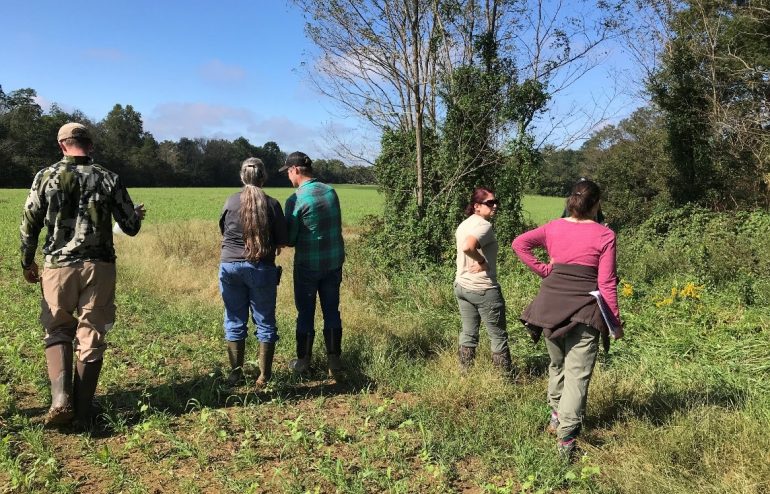 As part of our on-going initiative to develop habitat for Northern Bobwhite quail at both of our properties, the research team and livestock production manager met with folks from Ohio Department of Wildlife (ODW) and Pheasants Forever, as well as an USDA State Biologist who runs the Working Lands for Wildlife (WLFW) program for Northern Bobwhites in the State of Ohio.  The purpose of the meeting was to walk the areas where native warm season grasses (NWSG) will be established to discuss complimentary quail habitat.  As mentioned in an earlier post, bobwhites are known as an edge species.  Shrubby thickets should comprise 20-30% of the bobwhite’s habitat and should be no more than “a good softball throw” apart.  These areas provide protection from predators and extreme weather, offer traveling lanes and resting areas, and provide food.  The team of wildlife biologists showed us existing areas that looked promising for quail and also discussed how to manipulate areas to provide even better habitat.  The idea is to have some edge habitat approximately every 100 feet around our NWSG stand.

How can we tell if an area is good for quail?  We need to get a bird’s eye view.  You want to look about 12 inches off of the ground in shrubby areas.  If it looks like a quail can maneuver easily through the thicket while still having overhead protection about 12 inches up then you likely have some good quail habitat.  The picture below shows a bramble patch with a dense canopy yet plenty of open spaces underneath for a quail to maneuver through (but not large enough areas for a fox or coyote!).  Alternatively the thick sod-forming fescue (grass) in between the field and the thickets as seen in the same picture would cause an issue for the birds.  The softball size birds need open spaces to quickly out-maneuver predators.  These spaces are available in the clump forming NWSGs and the shrubby thickets, however the 10 foot wide strip of fescue between the two habitats slows them down, leaving them exposed to predators, both on the ground and in the air.  It was recommended to get rid of the fescue through a tillage strip, which will also open up the seedbank for ragweed, a quail friendly plant and important food source during winter months due to its seeds which provide energy and are an excellent source of protein for quail.