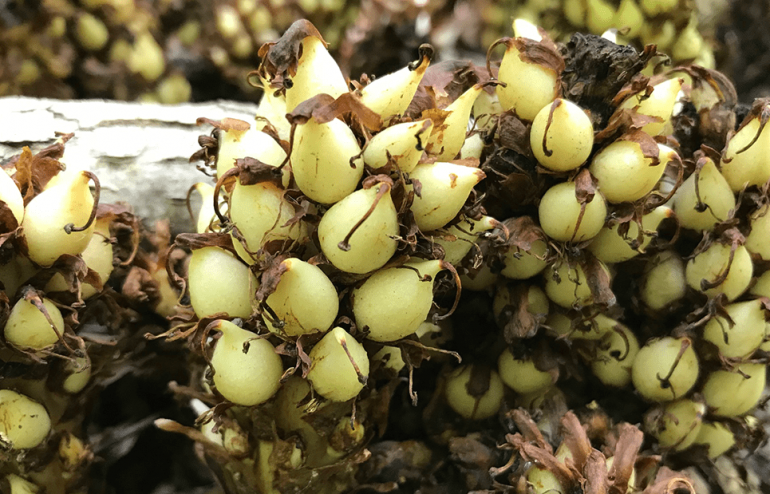 The darkness of the forest seems quite alluring on these hot and humid days. The fresh growth of large green leaves brings welcomed relief from the beating sun. It’s here in the shaded area that you can find American Squawroot (Conopholis americana). Most plants along the forest floor are competing for limited sunlight in the slow motion battle of ‘who can grow faster towards the gap in the canopy’. However, rather than undergoing photosynthesis, this parasitic plant uses specialized roots (haustoria) to feed itself from the roots of oak trees. I know most of us hear “parasite” and think of leeches and ticks. Did you know that plants can suck the nutrients from other plants? Rather than using energy on chlorophyll, it surreptitiously absorbs nutrients underground for four years until it finally pushes its stems above ground. The odd looking scaled stems pop up in clusters above the plundered oak root. Because of its unique look, squawroot is often mistaken as a fungus in any of its above ground stages. Squawroot produces flowers in the spring, creating what looks like a cream-colored pine cone village for the local fairies (pic 1). Pollinators such as flies and bees feed from the flowers, forming a seed capsule with multiple seeds in each scale (pic 2). The plants become more and more brown with time, and if you find them in the winter, you would think the poor fairies’ village had been burnt to a crisp. Some squawroot will reseed themselves, while other seeds are dispersed to new locations by foraging deer and other mammals. Another parasitic plant found in the area is beechdrop (Epifagus virginiana). Like squawroot, it is in the Orobanchaceae family, but it parasitizes beech trees rather than oaks (pic here). Squawroot may steal energy from the oak trees it parasitizes, but is not considered to be detrimental. It could only cause serious harm if the oak had a preexisting disease or illness.  I encourage you to enjoy a hike in the forest shade and try to find these unique plants! 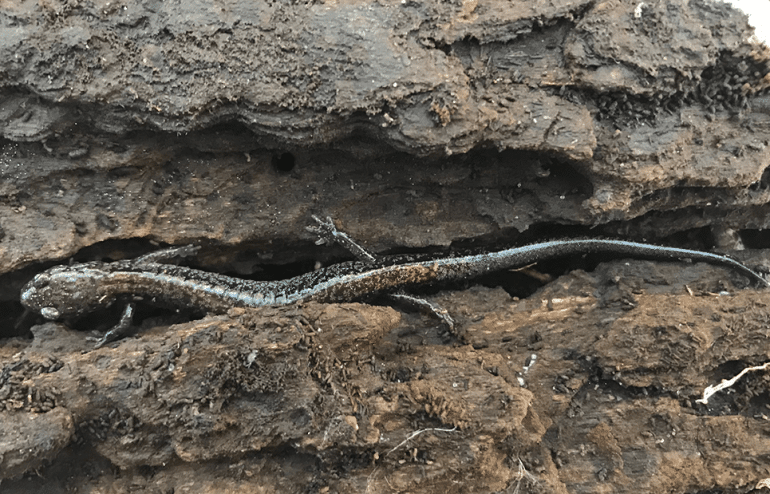 More times than not, when I lift a log with a group of kids, I hear, “A worm!” The next guess is usually, “No, it’s a lizard!” In their defense, salamanders are slimy, with four disproportionately small legs attached to a long, slender body. They even cohabitate in leaf litter or under rocks and logs, though the worms better be careful because they (and many other invertebrates) are part of a salamander’s diet. They’re actually amphibians, and unlike lizards and reptiles, salamanders lack claws, external ear holes, and scales. Eastern red-backed salamanders (Plethodon cinereus) are one of the most common salamander species found in Eastern North America. They can be found in two morphs: red-back (pic 1) has a bright reddish stripe down its back; while lead-back (pic 2) lack the stripe and are mostly grayish-black. All color variations have the mottled black and white belly.

Red-backs belong to the family Plethodontidae, also known as the lungless salamanders. Thus, like their amphibian relatives, they breathe through their skin. These sals possess a nasolabial groove, a slit between their nostril and upper lip. It helps with chemical cues involved with courtship, territory, and food. These unique woodland salamanders lack the common aquatic larval stage and lay their eggs in small clusters in cavities under rocks and logs in early summer. It’s a shame they skip this stage because gilled salamander larvae are adorable, but I suppose it’s a pretty nifty adaptation that has evolved in this group. The larvae develop in the egg (gills and all) and hatch in late summer.

Have you ever seen a reddish-brown, slimy creature wriggling frantically? No head, no eyes, no legs…not segmented like a worm…furiously flipping back and forth? A salamander can drop its tail in a last attempt to save itself from being eaten. The tail distracts predators while the rest of the salamander dives out of sight into the safety of shelter. When I encountered this ‘flee of survival’, a child was the curious “predator” trying to pick it up. We must be careful while handling our skin-breathing amphibian friends and also remember that humans often have harmful substances on our hands such as sunscreen, soap residue, or lotion. The red-backs are in full force right now because the warm spring weather is allowing them to emerge from their winter underground hideouts. I encourage you to take a hike and carefully lift a log or large piece of bark to find some of these little sals. Just remember to put the roof back on their home! 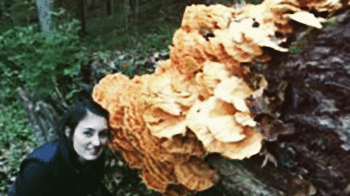 Nature’s recyclers, known as decomposers, play an essential role in nutrient cycling within our deciduous forest. Organisms such as fungi and bacteria break down humus (dead or decaying matter) on the forest floor. Through this process, fallen logs and deciduous leaves are returned back into the ecosystem, enriching our soils with nutrients, and ensuring the future growth of plants. This fall at the Greenacres Water Quality Education Center, we’ve experienced abundant rainfall and mild temperatures, ideal conditions for the growth of decomposers. Featured in this post is a brightly colored shelf fungus known as Chicken of the Woods (Laetiporus sulphureus). This mushroom is prized as a local favorite among edible mushroom enthusiasts. Several pounds of this tasty mushroom can be found growing on a single log.  Over time, this mushroom will release millions of spores into the air. Spores that land and germinate on a neighboring substrate complete the lifecycle, growing another generation of nature’s recyclers. This fungus is just one of many different types of decomposers that will grow on this log, slowly breaking it down over the course of many years.