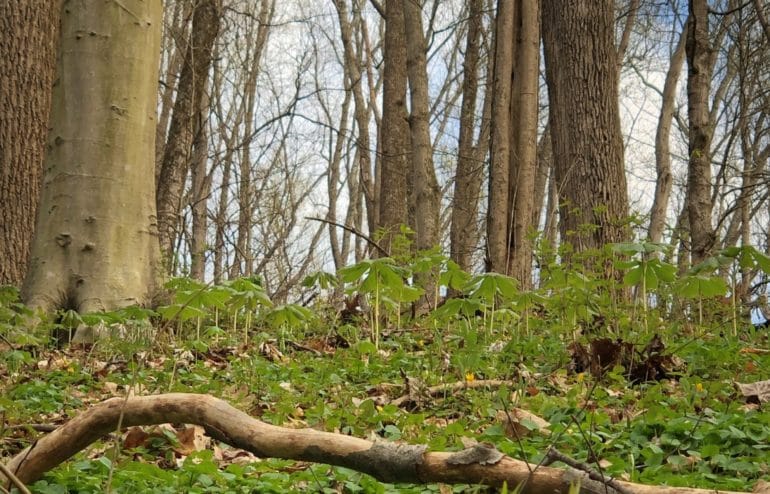 “Just look at the bark!”

One of my first jobs has been to identify trees on transects that have yet to be completed and confirm the trees on old transects. During this time I have also been teaching Megan and Jennifer some of the stand out features and my tricks to help me identify what tree is in front of us.  They grew weary of me always saying, “just look at the bark”.

When working in the Oak Hickory forest, I was blown away by the lack of honeysuckle. Unfortunately, the forest floor was still covered with dying lesser celandine, and the new carpet of Japanese stiltgrass was starting to grow. Both of these species are invasive in our area. As we identified our trees on the new transects, we found that majority of the trees are sugar maples. A few trees on the older transects were identified down to the correct genus, but we took it further and found the species as well.

We then started working in the Beech Maple forest, and again there was very little honeysuckle in this forest. As you looked around you could see the large beech trees scattered throughout the forest. Their trunks resemble large elephant legs due to their smooth grey appearance. We also found a very large sassafras tree near the edge of the forest by a trail used by team nature. The vast majority of the trees in Beech Maple were sugar maples just like the Oak Hickory forest. One can tell sugar maples from red maples based on the leaves. Sugar maple leaves are not serrated in the sinuses or on the lobes like red maple leaves. They also tend to have two lobes at the base of the leaf near the petiole that are larger and broader than a red maple leaf.

One trick I taught Megan and Jennifer was that if you fold over the top lobe of a sugar maple, it makes a square like a sugar cube. This is not possible with the red maple due to the serrations, or teeth, in the sinuses of the leaf. This forest could be potentially tapped for maple syrup production and education purposes in the future.