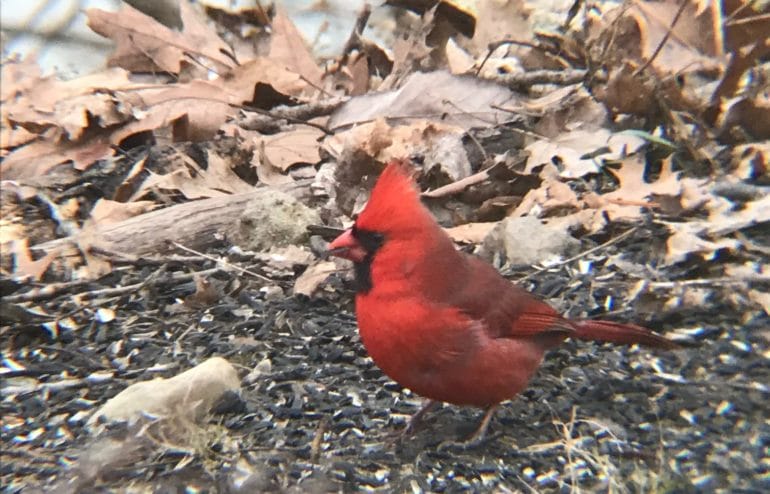 What comes to mind when you see a bright red cardinal in the winter? Beauty. Male. Contrast. Christmas. Charley Harper. What about awe? If you find yourself grumbling about how you don’t want to go outside and fill up the feeder again (because it’s too cold, you just filled it, or because they are costing you a pretty penny), think about how birds are exposed to nonstop cold temperatures this time of year. While our water fowl migrate during winter, most of our local birds (white-breasted nuthatch, finches, Carolina chickadee, northern cardinal, woodpeckers, wrens, tufted titmouse, blue jay, mourning dove, and more) tough it out all winter long. Clearly if they are so well adapted to survive cold winters, they could forage their own seeds and insects, but it’s a win-win to give them a little energy boost while getting to enjoy some local wildlife. In fact, most passerines (perching birds) are eating as much as they can during the day just to make it through the night. An excuse you don’t have this holiday season. On really cold nights, tiny chickadees and other passerines undergo ‘nightly hypothermia,’ meaning they use up all of their energy to keep warm by shivering. Birds would probably shiver themselves right off the branch if it weren’t for their special gripping feet. I know what you’re thinking, those dainty feet look as if they might break just by landing! The tendons in their feet have an involuntary reflex that automatically locks their toes around the perch when they land and unlocks when they straighten their legs. Now you know why birds make it look so easy to perch up on the tiniest branch at the tip top of a tree.
You don’t have to have fur like a deer or coyote to rock a winter coat. Passerines have quite the stylish and practical winter coats, made with a new set of down feathers. Fluffing up these feathers creates warm air pockets and keeps cold air away from their skin. Sorry to break it to you that birds aren’t looking like cute little puff balls for your enjoyment (although I do tend to want to give birds more food when they look like that). A common misconception about birds is their nesting area. Nests are used during breeding season in the spring and summer. This time of year, most birds don’t have a designated home, so they roost in a new spot every night. Some birds use old woodpecker holes and cavities in trees or seek out evergreens, thickets, and shrubby areas for protection from both predators and low temperatures. I encourage you to not only give our feathered friends mad props while they are crunching their way through your seed, but to go on a hike to look for small tree cavities and other good overnight roosting spots. 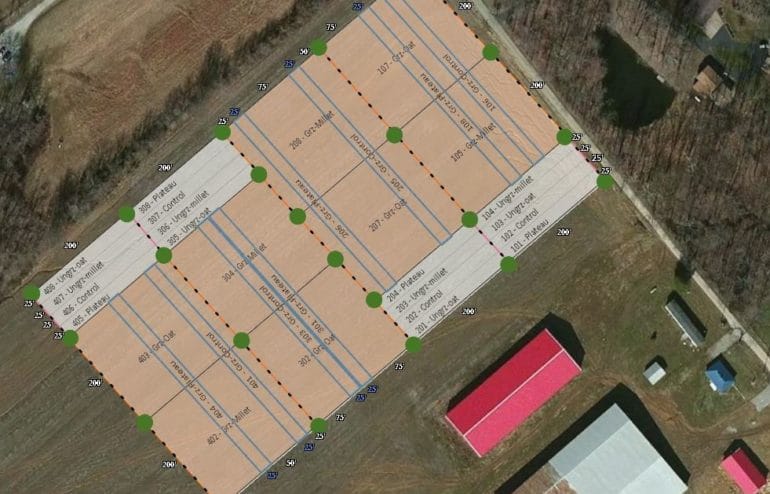 Dr. Pat Keyser from University of Tennessee made his second trip to Greenacres last week.  The purpose for this visit was to start laying out the research plots on the 10-acres that we set aside in Lewis Township, for the purpose of our research collaboration.  The study has 8 treatment levels with 4 replicates for a total of 32 different plots – all randomized.  In other words, it’s a fairly complex plot design to lay out across 10 acres (see picture).

To speed up the process, Jennifer and I decided to get a head start on laying out the plots while we were waiting for Dr. Keyser to arrive.  This was the first field study for either of us at this scale, so for the first several hours it was “one step forward, two steps back”.  I was beginning to question my ability to measure long distances.  Luckily, Dr. Keyser showed up in the nick of time, before we really dug ourselves in a whole – plot set up is old hat for him!

With the sun setting a little earlier these days we were able to get the corners of each plot measured off and marked (the green circles in the photo).  We will return later this week and get the rest of the plots flagged off.  After the plots are laid out we just wait until spring so we can start the planting process, starting with oats. 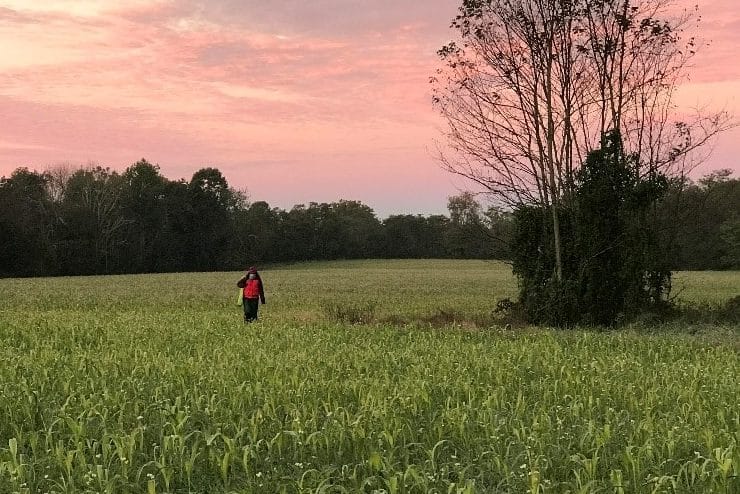 The past week has been a little busy in Indian Hill so we finally got a chance to do our third and final covey call count today.  It sounds like the coveys are located around one specific area so this time I didn’t want to take any chances and not hear them.  Jennifer and I split up again but stayed within sight of one another (once the sun came up) so we were both in the area where the quail were heard the first and second time.  Finally I heard it!  The covey call that had been eluding me the first two trips was just south of where I was sitting.  After the sun came up Jennifer and I both agreed on the direction that I heard the sound, however she also heard one to the northeast of where we were.  We thought we would try flushing the birds to try to see if we could get a count so we headed toward the edges of the field.  We had no luck getting the birds to flush out of their coveys but we both feel pretty confident that we at least have some quail walking about the Lewis Township property.  Now the goal is to see if we can increase our quail populations through improved habitat establishment and quail-beneficial management practices.  Call counts and quail monitoring will be an ongoing practice for our research team.  We are already looking forward to some early chilly mornings next October. 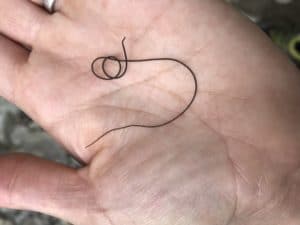 There’s something about long, thin worms that puts people on edge. Even I hesitated to pick up this little guy because of the fear of parasitic worms. Don’t worry, these horsehair worms (Gordius robustus) are not some parasitic nematode ready to crawl up your nose and take over your body. Well actually, I should clarify. You’re safe if you are a human. Even your pets are safe. However, if you’re an arthropod, you might be in trouble. The mature adults (like you see in the picture) aren’t the ones causing problems. It’s the babies you have to look out for, and you won’t even see them coming!

Adult females lay MILLIONS of eggs in the water. The minuscule (~0.01 inches) larvae are ingested by certain bugs for food. A hard covering (cyst) protects the larva, then dissolves after entering the gut of its host. Many macroinvertebrates become hosts because they live in aquatic habitats. Other common hosts are crickets, grasshoppers, and beetles because they eat macroinvertebrates, thus becoming the new host to the horsehair worm. As a horsehair worm develops into an adult over a few weeks or months, the host becomes the ‘walking dead’. Because adult horsehair worms require water to leave their host, the zombie host bug is triggered to find water, where it meets its demise. Most of us have seen witches melting from water in the Wizard of Oz, but here’s a new visual for you: death by worm breaking through a body cavity. And if you really want a good visual, search for horsehair worms on youtube. You’ll find all sorts of videos of them crawling out of crickets, spiders, cockroaches, and other arthropods. Maybe save it for Halloween.

One legend behind their name is that people believed the hairs from a horse’s mane or tail would fall into the water bucket and come to life. In reality, a cricket or host had hopped up to the water bucket, prompting a horsehair worm to break free in the water source. They are also referred to as Gordian worms because they twist and squirm into ‘Gordian knots’. In addition to having a very remarkable life cycle, horsehair worms are important for keeping our pest population in check. I encourage you to go on a hike and keep an eye out for any strange behavior from arthropods around water.